Imagine this. You are working on a craft, your kid is trying to cut something out, except you KNOW they can’t do it themselves. You offer to help. They push you away. 2 minutes later there is a pair of scissors chucked at you and paper flying everywhere. Sound familiar?

Children feel all the emotions that we feel as adults. The difference is that they haven’t learned how to process them.

Think about it. These emotions take over their thoughts, their actions and they don’t even have a label for it. The source for most tantrums is an inability to process or community feelings. Children often act out their emotions because they don’t have the words to talk about them. So rather than saying they are frustrated about not being able to cut the paper, they show it by letting their emotions take over.

So what can we do about it?

By labeling the emotions we make it easier for our children to express them in the future. A common mistake that parents make is that we tend to ask our children to label the emotions, which can be frustrating, especially when they don’t have developed language skills.

For example: Instead of asking your child “are you feeling sad?” Instead label it by saying: “Oh you broke your toy, you are feeling sad.” 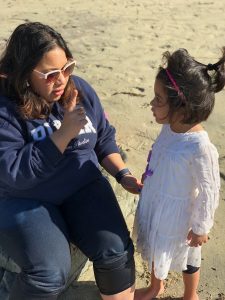 Label the expression of emotions

After you have identified your emotions, it’s equally important to be able process and express it. For example, your child might understand that they are feeling frustrated, but not know what to do with that feeling.

The natural feeling is to express it, aka throw the scissors, but socially we know that isn’t okay. Instead you can say things like, “when I feel frustrated, I like to take a deep breath”. Or “When grandpa is feeling sad, he likes to be alone”.

They say practice makes perfect right? So practice labeling the emotions and expressing them.

You must be thinking I’m crazy right? When there is a pair of scissors coming  your way, the last thing on your mind is teaching your child!

That’s why practicing when you aren’t feeling those emotions is key. A great way of doing that is using books! Books can help by providing relatable social stories that help your child understand emotions.

For example, you can ask how a character is feeling. Use it as a jumping point for a discussion on how you express that feeling! Books also are able to express the emotion that crosses the boundaries of language, through colors, sound and imagery.

One of my all time favorite books to use to teach emotions  is In My Heart by Jo Witik. The book not only labels emotions like happy and sad, but also more complex emotions like shy and brave. It uses colors and imagery to explain how your “heart” feels during the emotions. 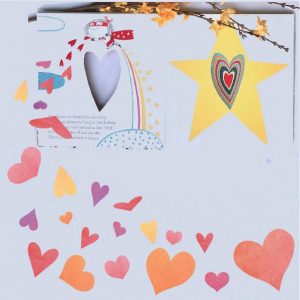