Press pause. Give her a bite.

Press pause. Try to get her to chew.

Our relationship with TV/screen time slowly got toxic. By toddlerhood it got hard to tell who was the addict, me or her.

But one thing was clear, this addiction needed an intervention.

Let me back up and first paint the picture of how we got here. Our addiction began with Super Simple Songs on youtube. They were wonderful for exposing her to language, and it really was working because her speech! She would pick up new words, and was so engaged while watching! It wasn’t a couch potato situation, if she wasn’t sitting on the couch right?

However, with time, the engagement decreased. She would just stare at the screen. When Daniel Tiger would ask a question, she would just stare blankly. I assumed she was bored or not enjoying it, but that’s all she wanted to do: watch TV or Youtube on my phone. 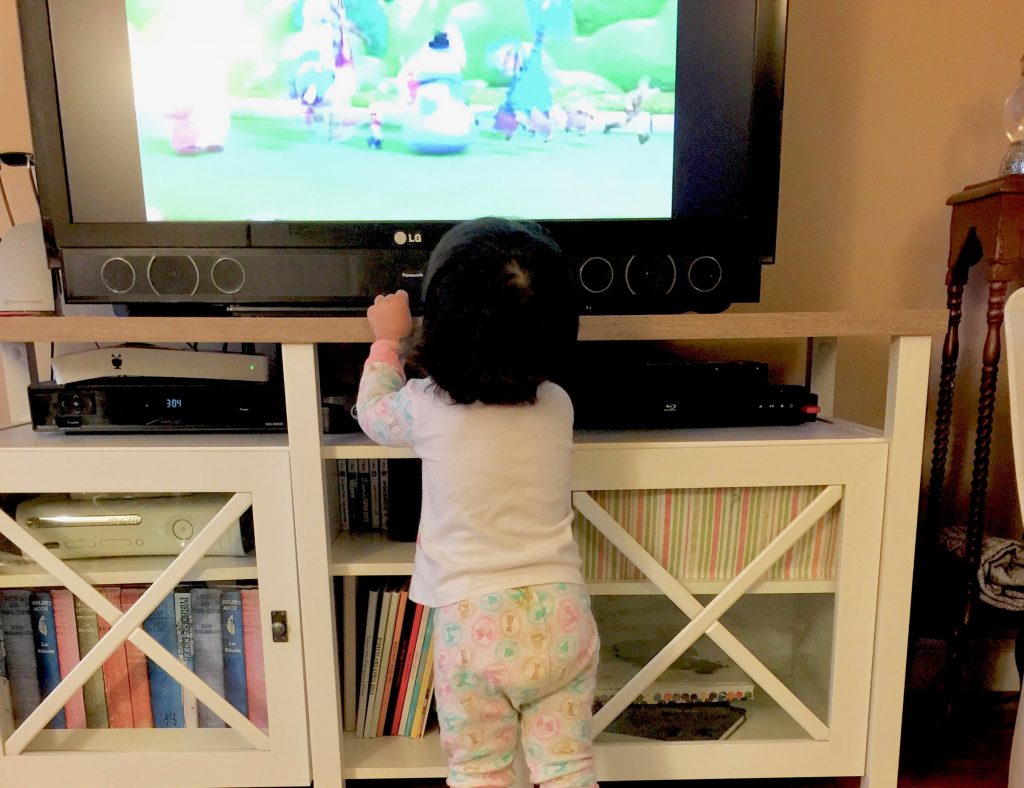 Clearly the addiction was hers not mine right? That’s not entirely true, my addiction to screen time was a bit more subtle. Screen time was just easy. I could shop in peace, eat in peace, shower in peace and everything in the house stayed status quo as long as she had the screens.

But my mom guilt was building up, so I decided to “fix” the problem: make screen time engaging.

I flooded her iPad with games and got rid of the video apps. While this was better, it was a band-aid. Yes, she wasn’t mindlessly watching random videos. And yes, she was learning new skills from these games. But she was also missing out on practicing and essential skill, self-directed play.

Self directed play is a way of teaching innovation.

Innovation comes from thinking out of the box, finding unconventional ways of solving problems. In today’s competitive world, standing out and being creative is becoming synonymous to being successful. The games on the iPad are directed play. They have a specific way to interact with them. They are easy to play, because there are rules.

Screens are part of the future, our kids will be exposed to them at some point. Plus, screen time isn’t all bad, like I said before, screen time was helping my daughter learn initially. Here’s my journey.

I started by setting my ultimate goal. What is my ideal relationship with screen time. I wanted it to be something that my daughter could earn once a day. That way she could still benefit from it without being addicted to it. Kind of like sugar? Some sugar once in a while is great, but it shouldn’t be a standard. But to break an addiction you have to go cold turkey, any middle ground ends up being a band aid.

An addict in with drawl isn’t pleasant company. I had to mentally prepare for not just my own with drawl, but also my daughters. I identified times that we are most dependent on screens and made a game plan. For us, it was meal time and restaurants/shopping. At the beginning of this journey, I simply avoided restaurants or social situations where I knew I would give in to the pressure. Those were the times when my addiction was tested.

My daughter was entertained by screens, I couldn’t take it away and not expect a reaction. My plan was to provide her with other entertainment to soften the blow, a way to keep her mind off things. The first week I took away the screens, I booked us solid with “things”. From play dates, to craft activities to library visits! It was easier to say no to screens if we weren’t home. The following week, I planned less activities instead had a bunch of at home activities, like crafts, chalk outside etc. Slowly, and I mean slowly, my daughter stopped asking for TV because it became clear to her that was not an option. Times like meal time were hard because we were both dependent on screens for it. So I replaced the TV with my craft table. I made meal time super fun by turning it into an activity. We colored while we ate!

No matter how much you plan, there will be tantrums and melt downs, and those can be physically and emotionally draining. Find a partner (your spouse, your mom or even a friend) that is on board with what you are trying to do. Have them take over for a few hours so you can recover too. My husband would help out by taking over on the weekends so I could just take some time to replenish my body and mind.

Once the dust settled, I revisited my goal. Screens are a part of my family. My husband loves movies and always wanted to pass on that passion. Movie parties were their way bonding. Taking away screens meant taking away that. I wanted to introduce screen time in a way that we as a family had a healthy relationship with it.

Screen time (iPad or TV) became something that she could earn. For example, during potty training, a day without an accident meant she could watch TV. Or when she does exceptionally well at meal time (trying new foods without complaining or being difficult) she earns screen time. Recently, when she is able to learn a new concept with her Quran teacher she earns screen time!

Screen time also has become a special treat, like cake. On birthdays, we have pajama movie parties! It allows us to not only control screen time but actually enjoy it without the guilt!

It’s not easy going through these steps, but at the end of the journey I am so glad we did. It was hard going cold turkey, but I knew it wasn’t forever! I hope you found this helpful and it helps you develop a healthier relationship with screens!

1 thought on “5 Steps to tackle that screen time addiction”